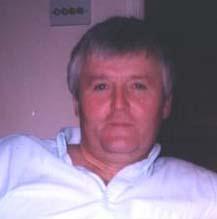 Tony Brosnan is an electrician from Bruff Co Limerick and has been missing since 6 February 2003. On that day at 12 Noon he was seen by a local Bruff man travelling from Lissycasey to Kilrush. On the following morning a man fitting Tony's description was seen in Kilkee Church enquiring about the times of masses. The next sighting of him was on the following Sunday (9 Feb) walking along Lahinch Beach at around 2 P.M. There was also a sighting near Miltown Malbay. He had just dropped off his son at a house where they were carrying out repairs. He was driving a light blue VW transporter registration number 91 L 1138 (which was later found in the sea). He was last seen wearing a navy jumper, blue work pants, navy work boots and a navy long sleeved jacket.
Update: Vehicle has been found in Kilkee (April 2003)

Anybody with information should contact Bruff Garda
Station telephone 061-382940 or any Garda Station.