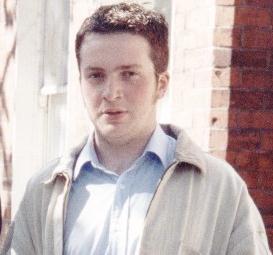 Sean was last seen on 2 September 1998 and was wearing a brown corduroy jacket with fur lining and collar, Caterpillar boots and jeans.

Sean left Downpatrick 2 September 1998 of his own free will and didn't tell anyone why he decided to leave . In the first week he met two people that we know of , one was his cousin and the other was a Garda. Neither of the two knew that Sean was missing at the time and neither suspected that there was any problem as Sean told them that he was touring around the country for a while .The two sightings were in Galway and Clare. He was last seen near the Cliffs of Moher Co Clare on 5 September 1998. Sean was an A Level student but was also interested in Catering and may be employed in a Restaurant.
No more sightings since 5 Sept 1998.

Anyone who can help locate Sean or who have any information concerning his disappearance are asked to get in touch with the police at Downpatrick on 028 44615011 or contact the webmaster. Sean can call the Missing People charity’s Message Home service on Freefone 0800 700 740 where he can pass a confidential message to his family.

Information above has been placed here at the request of Sean's family. See below a photo that has been age progressed by the Missing People Charity in the UK.

See a U Tube Appeal for Sean Ryan