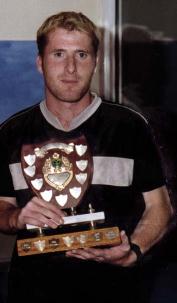 Pearse Cremin from Glasheen Road Cork City is a well known Tennis Coach in the Cork area where he taught tennis in many schools. When last seen on Oct 31 he was wearing a navy coloured tracksuit, runners, a white T-shirt with red writing on the front and a blue fleece top. He is 5 Foot 8 Inches tall, small build, hair is slightly red and cut short.

There was a positive sighting of him in Cork City on November 9th. His family are appealing to him or to anybody who knows where he is to get in touch. All they want is a phonecall to let them know he is OK. Please contact the Gardai at Barracks Streek Cork City +353-21-4316020 or email the webmaster of this site.

Update: A person fitting Pearse's description called on Christmas Eve (2000) to a Guesthouse on Mac Curtin Street Cork City. He was looking for a room but there were no vacancies. There have also been other sightings of him in and around Cork City.

This information has been placed here at the request of his brother Cormac.