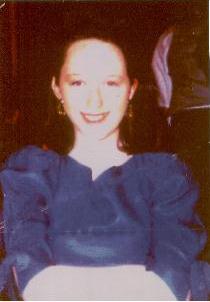 Jo Jo Dullard was 21 years of age at the time of her disappearance. At the time that she disappeared she was making her way from Dublin back home to Callan in Co Kilkenny. She made a phonecall from a phonebox in Moone Co Kildare. A short time later a woman answering Jo Jo's description was seen leaning in the back door of a dark coloured Toyota Carina type car. There were further sightings of a woman similar to Jo Jo in Castledermot, Co. Kildare at around mid night. The driver or occupants of this Toyota Carina type car have never been traced. That was the last that anyone has heard from her. When she never reached her destination, her family became concerned and reported her missing to the Gardai. Last seen wearing black jeans,
black jacket, white top and black shoes.

Despite an extensive investigation by the Gardai and widespread publicity at the time, Jo Jo has never been found. It is a mystery as to what happened to Jo Jo. But someone out there does know the answer and ultimately they will have to answer. Anyone with any information should contact the Gardai on their confidential free phone line at 1-800-666-111 or any Garda Station.