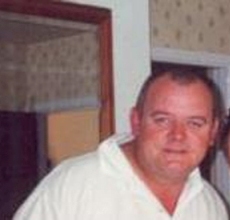 Jim Doyle was last heard of in feb 2003. He left his home town of Carrick-On-Suir Dec 2002 to start a job in Glasgow. His family have not heard from him since:( his 4 daughters and family miss him terribly. we just want to know if he is ok).

He has a dimple on his chin hair and would be grey now, blue eyes possibly, walks with a limp, has a irish accent was a painter decorator by trade but could be doing other work.

He left his hometown of Carrick on Suir, Co. Tipperary in December of 2002 to go to work in Glasgow. Family have had no contact with him since February of 2003.

He is approx 5′ 10 inches tall, receeding hairline black hair (more than likely grey now) he has a very distinctive dimple on the tip of his nose and on his chin, he has artharitis in his left knee so probaly has a limp.

If anyone has any information please get in touch with your local Garda or Police Station.