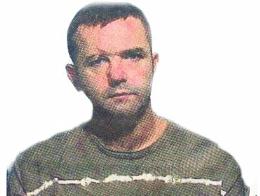 Gerard Conway was last seen walking at around 8pm on the 6th of February 2007 in Cookstown Co.Tyrone. He hasn't made any withdrawals from the bank and his family and friends are becoming increasingly concerned.

He is described as being 6ft tall and of medium build with short dark brown hair and blue eyes. He has scars on his right eye-brow and his scalp.

The family have put up a reward of £100,000 for anyone who knows of Gerard's direct whereabouts.