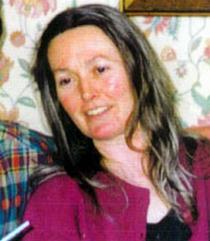 She took many jobs including hairdressing and house cleaning (so may be working in any of those jobs).
Originally from Ballyfermot but living in Windy Arbour for the last 9 years. Ellen disappeared on November 3rd 1999 in Hollyhead while returning from Manchester where she had recently visited her sister,Bertha Lee nee Brown.
She has been an active member of both AWARE and GINGERBREAD.
Ellen was separated for many years with an adult son Peter who is living in London.
She has not contacted her relatives.
Ellen was involved in the Windy Arbour/Dundrum community.
She had a love of traditional Irish music and walking.

After her disappearance there were a number of reported sightings of Ellen. But her family are satisfied that these sightings were of people who looked looked like her.

Her whole family are concerned about her whereabouts including her brothers Tom and James-William.

Anybody with any information regarding the whereabouts of Ellen should contact the Gardai at the Bridewell Garda Station telephone +353-1-6668200 or any Garda Station or Greater Manchester Police or email the webmaster of this website.