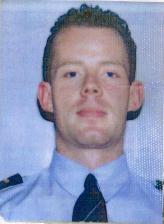 Desmond Walsh has been missing from Limerick City since 18 Sept 1999. When last seen, he was wearing a brown check sports jacket and navy pants. He worked as a security guard at Dell Computers in the Raheen Plant and lived nearby in a flat. He was last seen at 2 A.M. on the 18 sept 1999 coming out of the "Works" Club in Bedford Roe, Limerick City. Prior to that, he had been in Costello's Pub and in the Glentworth Hotel. There are reports that he was seen, after he left the Works club, on Limerick Docks at Harvey's Quay. He left behind his clothes, bank card, keys of flat and passport and his bank account has not been touched.

His heart broken family desperately want to know what happened to him. Perhaps you met him on the last night he was seen. Any information you have can be helpful. If you know where he is or have any information about him, please contact the Gardai at Roxboro Limerick (+353-61 - 214340) or contact the webmaster of this site.