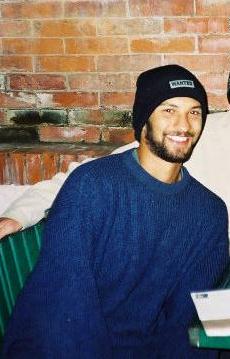 Alex Ratnasothy left home on 17th of April 2002 and was expected back in April 2003. As a backpacker, Alex had been travelling through South East Asia, New Zealand, Australia, Thailand, and Burma/Myanmar then arrived at Kathmandu, Nepal on Thursday the 20th of February 2003.

Saturday, 22nd of February 2003 Alex started his trekking from JIRI to EVEREST BASE CAMP via NAMCHI BAZAAR. Then may be to Tibet. According to his last email 21st of February 2003, he was due to contact us again from the Everest Base Camp. However, unfortunately we didn't receive anything from Alex. Alex's mother is orginally from Glenbeigh in County Kerry and Alex is from Essex UK.Photo above was taken on Friday the 21st of FEB 2003 at Kathmandu, Nepal, just a day before Alex started his trekking to Everest Base Camp. This picture was taken at the Hotel called Annapurna Lodge, where Alex stayed with an American couple.

If you have information on Alex please contact your local police or embassey or contact the webmaster of this website. His family are very anxious to know if he is OK. See also other website about him.